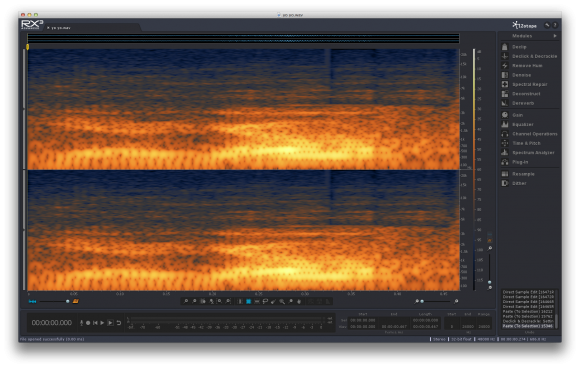 I recently began doing audio post production for film, and though my skills from engineering and producing music translate over very well, this kind of work is a different beast all to itself.   Without certain tools you would find it near impossible to restore and use audio that was captured on location.

I am finding iZotope RX Advanced to be one of those tools.  With RX3’s recent winning of an Engineering Emmy Award for Audio Repair Technology it is not hard to believe that this software is the industry standard for post production and audio restoration needs. 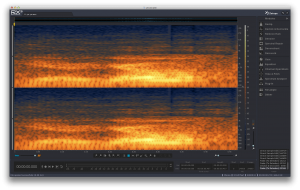 I originally got the standard iZotope RX, and began working on my project with the Denoise and the Declip plugins.  There was a scene filmed in a club with a jazz band playing that was delivered to me with audio levels pinned through the roof.  The audio was completely destroyed by massive amounts of digital distortion that no amount of standard EQ and compression was going to smooth out and restore to a natural wave curve.  I dragged the Declip plugin into my DAW (I use Ableton Live 9 for all my production needs, as I have found it faster and more versatile than my old DAWs: Pro Tools and Sonar) and added it to the audio track of the club scene.  After a minute of trying the presets and then working with the threshold levels, I had a completely natural sounding restored audio track.  AMAZING!  I could pretty much stop the review here and tell you that you NEED this software based on this single experience, but wait, there’s more!

BEFORE: Wav file with peaks above 0db clipping the top of the curve causing digital distortion

AFTER: The same wave file after basic processing with the iZotope RX3 Declip plugin. Notice the top of the curves have been redrawn to replicate a natural audio wave curve. No more distortion.

Anyone who who has tackled audio post production for a film will tell you their nightmare stories.  In the middle of the most important lines of the entire movie, the dialog that was delivered to them had a phone ringing in the background, or an airplane flying overhead, or a bus, or an explosion, or huge click, or  some bizarre random sound.  Watch closely and you will see that nervous tick start in the corner of their eye, and their fists start clenching erratically.  And for some reason the actor that spoke those lines is unavailable to come in and do ADR.  Well this is where iZotope RX Advanced really stands out, and this was the functionality that made me upgrade from the standard version to the advanced.  The price is painful, but once you start really using it the value becomes clear. ($1,199.00 for the advanced, $349.00 for the standard).  For this job I exported the section of dialog from my DAW and opened it in the RX stand alone for some real surgery. 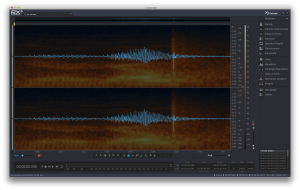 With the Declick plugin and it’s advanced parameters I was able to remove 99% of the massive click that was disrupting the dialog, and the rest of it by pasting over the transients.  The crazy part is that you can copy and paste the transients in the upper spectral range from a clean area to another in the timeline thus maintaining the general ambiance of the whole dialog track.  Again, AMAZING!  It is like Photoshop for sound.  Not only can you cut and paste audio from one section of the timeline to another, but you can cut, paste, or remove transients from within the spectral range. 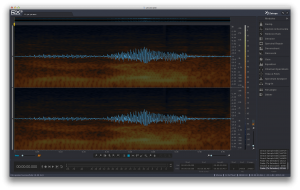 The same dialog wav with the click/pop removed.

This 15 minutes of fiddling in RX saved me the two hours of set up, explanation to the actor, and tracking that it would have taken to ADR that dialog.  When I realized how much time and frustration this software had saved me I jumped up, cheered, ran around my control room shouting, much in the way the alchemist would when he finally figured out how to turn lead into gold.  After I settled down again, I saved the now repaired audio, closed down iZotope RX, dragged the audio file back into my DAW and dropped it back into the timeline right on top of the old file. So simple, so elegant.

Another big problem with location audio is that often the room sound that is captured has waaaaay too much reverb in it.  Luckily the crafty buggers at iZotope thought about this problem too.  The RX Advanced version comes with a Dereverb plugin/module.  With some careful adjustments to settings I was able to remove the boomy quality of the room, enhance the vocal so that it sounded more up front, but still natural, and save myself tons of ADR and foley work again.

An extremely well thought out feature of the iZotope RX and RX Advanced is that they both have unlimited undo history, and compare functionality.  Don’t like what you did to the file, just step back.  The “compare” functionality is basically a way of previewing your desired changes without committing to them when you are working with any of the plugin modules.  You can come up with settings that you like, hit compare, and it makes a file entry.  Now play with more settings and hit compare for every incremental change you make.  Then you can demo each separate compare file to see which one you like best, and either process the audio then, or keep fiddling until you have exactly what you want.  This is really helpful in working conservatively  and avoiding any processing that would make your audio sound unnatural.  You can just play until you are happy with no fear of messing up your original audio and not being able to go back.  It’s almost as if they thought of everything.

The Denoise plugin of the RX standard is pretty good, but took a bit of work to get good results that I felt I could have achieved with the normal EQ and Gate plugins supplied in my DAW.  The Dialog Denoise plugin available with the advanced version is another story.  This advanced plugin was much more powerful and quickly got me to my goal.  This was one of the main reasons that I chose to upgrade to the full advanced version.

There is a bunch of other functionality included with the iZotope RX Advanced version that I haven’t had the chance to fully explore yet, but I expect them to be as powerful and useful as the features I needed right away.  Below I attached a list of all the features available in either version RX and RX Advanced.

The iZotope RX standard version is a powerful tool with a lot of features, but to be truthful, it will leave you wanting more.  You will be scratching at your wallet and peering into your bank account to see how quickly you can upgrade to the RX Advanced version, and hoping for more functionality.  I think they designed the tiers of the software that way intentionally.  Get you in the door for short money, and once you are hooked, make you fiend for the full functionality and power.  I assure you the advanced version is worth it.  If an Emmy Award didn’t convince you, let my endorsement help you decide.

If you have experience with the iZotope RX or other audio post production software, please share your thoughts in the Comments section.