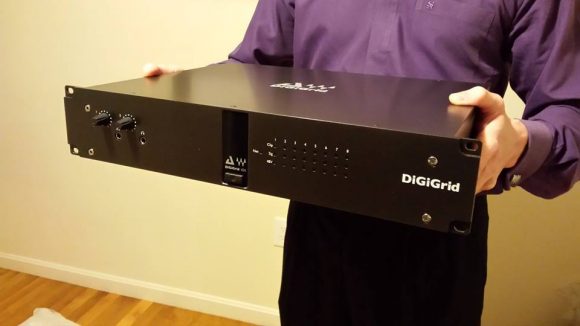 I have to admit I was really nervous purchasing the new Waves/DigiGrid interface, and the lack of a DigiGrid IOS review from an actual user really made me drag my feet on pulling the trigger. Running Beach House Studios, a small to mid-sized recording, mixing, and mastering studio in the metro Boston area, I found myself in the awkward position of needing to upgrade my OS to be compatible with software that was critical to my workflow.

Unfortunately I was unable to upgrade because my previous audio interface was no longer being supported with drivers for any OS beyond 10.8.5. I knew it was well past time to be looking at a new audio interface, but there were several additional pain points that were developing because of my rapid expansion in business over the last year.

95% of my third party plugins are Waves plugins, so when front-of-house engineer Johnny Wiz introduced me to the idea of Waves Soundgrid, and Studiogrid, these systems seemed like an obvious fit. I started researching and saw that Waves and DigiGrid were about to release their whole new audio over ethernet interface I got very curious. Never one who desires to be an early adopter of new technology, I prefer to wait for a year or two, let the bugs get worked out, read the user reviews, and then make purchase decisions. Unfortunately I found myself in a place of technological need, and with the growth of my studio business the new DigiGrid IOS seemed like the right choice as the new backbone of my studio. With the addition of two IOX units this system would address all three of my pain points, and save me thousands of dollars on a separate cue system, and cabling. Was it too good to be true? 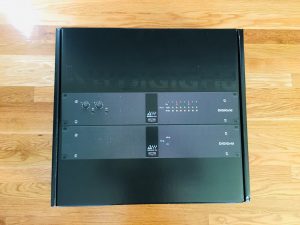 The DigiGrid IOS unit arrived nicely packaged in the slick black DigiGrid box with just the IOS unit itself, the power cable, a short ethernet cable, and a small postcard with instructions to register the product in your Waves account at waves.com. It then explains that once you have registered, a download link will appear in your account to get the software to install. I remember thinking this seemed a little sparse on the setup instructions, but it really was that simple. When you get the software downloads there are also two PDF downloads for instruction manuals available there.

Initially I set up the IOS on my desk next to my computer so that the system could be installed and tested before making custom CAT 6 cable to rack the unit in the back of my control room.

The fans on the server built into the IOS unit are pretty quiet. Significantly quieter then the fans on a Macbook Pro Laptop, and even quieter than the air blowing through your central AC, if that gives you a reference point. And when the unit is racked up about 6 feet away from my mix position, the room would have to be dead silent in order for me to hear the noise of it at all. 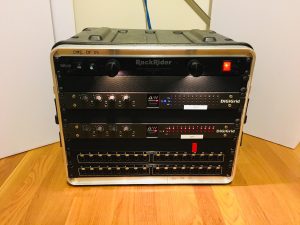 I love the concept of audio over Ethernet. First, and this is huge in my book, it is a massive cost savings. Being able to make my own CAT 6 Ethernet cable and run that for up to 100 feet in order to place my IOX units in live tracking rooms instead of running a Mogami snake saves me tons of money. 50 feet of 24 channel Mogami snake would cost me roughly $1290.00. I can buy 500 feet of CAT 6 cable for $80.00. That is a huge difference.

Second, there are Ethernet ports on every computer available out there. Firewire has come and gone, USB has gone through several generations, and thunderbolt is not available on all boxes. With the largest data transfer bandwidth of all the formats to date Ethernet not only seems like the most elegant solution, it appears future proof, and cost effective.

The new Mac Pro (trash can) even comes with two Ethernet ports, so you have one for your controller or whatever, and one for audio. If you need another port, there is always the option of a thunderbolt to Ethernet adapter. 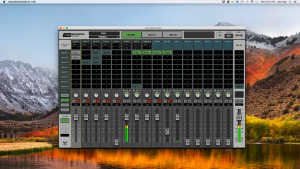 The eMotion mixer is a bit limited as far as channel count (8), but you can work around that by going into the settings on additional IOX units if you have them. If you need up to 64 channels in your software “console” you can get your hands on the LV1 mixer for around $1600.00 USD. Think of what a 64 channel hardware console would cost you, and let your bank account breathe a sigh of relief.

The GUI of the eMotion mixer is pretty nice looking, and the only criticism I have for it is that the meters are directly in line with the faders, so that at certain points your meter levels can end up behind the translucent fader pad. Since I only use the eMotion mixer for routing, setting preamp levels, and headphone mixes, this has not been a real problem.

The sound quality of the preamps on the IOS and IOX units are amazing. Recording into them has been flawless, and with the Waves Soundgrid system supporting Waves plugins, you can insert any of the Waves console emulations into the eMotion mixer and record through it. Basically that means I can have an SSL sound one day, a Neve the next, and an EMI the day after, or even a combination of all three on different tracks.

The A/D and D/A converters are also top quality, and a much bigger improvement over my last converters than I expected. I can only describe the experience as “surgical”. The width and depth I can now perceive in mixes is beautiful, and a pleasure to work with.

Patching in the eMotion mixer took a little getting used to, but once I got my workflow down it has been seamless and I have not had to worry about it. The one major advantage of the patching of this system is that you can basically patch any channel sound source to any input or output in the entire system. It is nearly infinitely configurable. 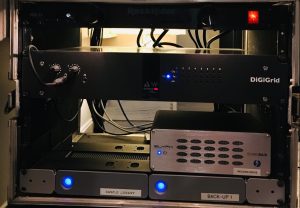 The DSP server on the IOS unit has been irreplaceable in my workflow. In the past when nearing the end of a mix I would often be close to, or at the limits of my local CPU. Now when this happens I just offload the processing of any Soundgrid compatible plugin in the Studiorack plugin to the Digigrid server, and free up my local CPU. This effectively doubles your plugin processing power!

I am super happy with the Waves/Digigrid IOS and IOX units, and would completely recommend them to another engineer.

If you are tired of paying the electrical bill for your hardware console, and cranking your AC to deal with the heat generated by it I would definitely suggest looking into moving over to the Soundgrid system and a software LV1 “console” system. Just think, no more channels on your board out of service while they are getting repaired, no more console maintenance costs, and using a mix of SSL, Neve, and EMI on any channel you like, whenever you like.