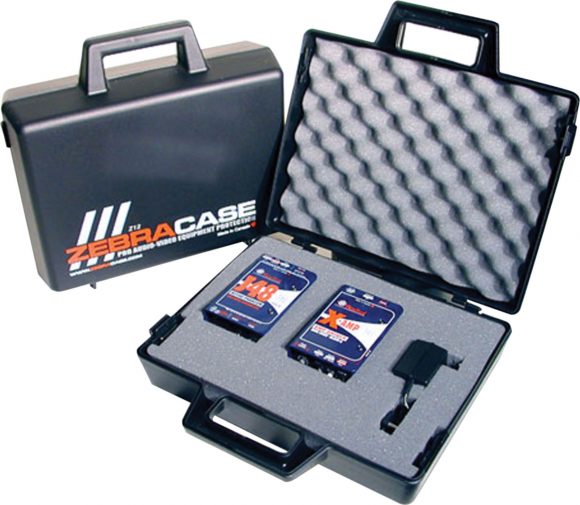 As a studio engineer speed and flexibility will always be your ally in keeping your clients happy.  Your job is to capture the artist’s greatest performance, their instrument’s purest tone, and keep their mind free of any technical details that would inhibit their focus.  One thing you quickly learn is that as songs are recorded, they can change, grow, get edited,  and take on a life that was not expected when the first few notes were tracked to tape.  That perfect clean guitar sound might not be aggressive enough by the time you get to the final mix, or perhaps that high gain distortion is way too over the top for the new approach that the vocalist now wants to take on the bridge section. Whatever may be the case, having the flexibility to change the sound and tone of an instrument without changing the performance can save you massive headaches during mix time.  This is where the Radial J48 X-Amp Re-Amping Pack comes in.

Rather than trying to capture the perfect performance on guitar, bass, or any other line level instrument, and then attempting to recapture that same feel and vibe with a second “safety” performance direct to tape, you can plug into the Radial J48 splitter box directly from your guitar, run one feed to the amp that you mic’ed up, and run the second feed direct to tape.  This way every performance you capture you will get both the amp tone and a “safety” track at the same time.  If for some reason you want to change the tone of your instrument later down the road, you can now just send that direct performance back out to the Radial X-Amp and into a new amplifier.  Mic up that amp, and you can re-track as many new tones using that same perfect performance without having to get that musician back into the studio for a new tracking session.

This kit can also help you out if you know exactly what sound you want to get to tape, and you need to mic up more than one amp to get the perfect full rich tone.  Just run direct out of your guitar to the J48 and split out to your two different amps.  Of course at that point you get no “safety” track, so you may consider just tracking that first direct track to tape anyway then re-amp out to as many new amplifiers as you can gather into your sweaty little hands.

I use the J48 for all guitar and bass tracks that I record at Boston local, Beach House Studios, and it has definitely come in handy on more than one occasion.  I have mixed a mic’d cabinet with a direct track played through the Guitar Rig plugin when I am a little to lazy to mic up another amp and I already have the perfect sound in Guitar Rig.  I am not beyond trying any combination of techniques to get the perfect tone. 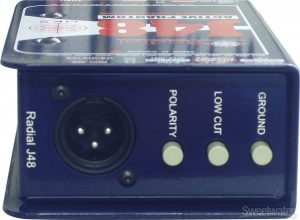 The other thing to note about the Radial J48 X-Amp Re-amping Pack is that it’s signal is super clean.  I tried a Morley signal splitter and it was useless because of the hum and signal loss.  However, when I plugged in the J48 for the first time, I just hit the ground button, and I had a pure clean tone the first time,  and no headaches.  I would also use the J48 in a live situation if I wanted two guitar amps on stage.  The build on the box itself is rock solid, and the whole re-amping pack comes in a nice Zebra case so it is road ready.

I would highly recommend this kit for any studio engineer who wants to save time, and retain flexibility for when the mixing sessions begin.

Let us know how you have used the Radial J48 X-Amp Re-amping Pack or any of its components in your recordings or live on stage by leaving a comment.