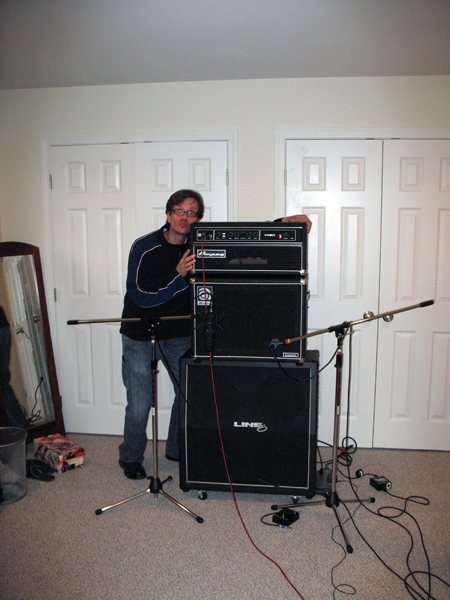 We set up Jim Collins and his Ampeg amp on top of my Line 6 4×12 cabinet in the live room for some nice isolation.  He wanted his cabinet up high so that he could get extended sustain on a couple of songs where he pressed the head stock of his bass against the speaker cabinet.  Set up an Octava 319,  an ATM 25 (usually a kick drum mic, but also does well on bass) one foot from the cones just off center, and a Behringer ECM 8000 about twenty feet back in the room to get a natural full room sound.  We also took a direct line out of his amp in combination with the three mics.  Total four tracks recorded for each performance, and mixed to taste.

Jim cut tracks for six songs over two eight hour days with distortion overdubs and an additional direct into the box safety performance that can be re-amped later if we need a drastic change in sound. The additional performance directly to tape is probably overkill, but Jim was nailing his takes so it seemed like not too much trouble to add an additional option as a “just in case”.

Next we will be recording Erik on rhythm guitar.

This website uses cookies to improve your experience while you navigate through the website. Out of these cookies, the cookies that are categorized as necessary are stored on your browser as they are essential for the working of basic functionalities of the website. We also use third-party cookies that help us analyze and understand how you use this website. These cookies will be stored in your browser only with your consent. You also have the option to opt-out of these cookies. But opting out of some of these cookies may have an effect on your browsing experience.
Necessary Always Enabled
Necessary cookies are absolutely essential for the website to function properly. This category only includes cookies that ensures basic functionalities and security features of the website. These cookies do not store any personal information.
Non-necessary
Any cookies that may not be particularly necessary for the website to function and is used specifically to collect user personal data via analytics, ads, other embedded contents are termed as non-necessary cookies. It is mandatory to procure user consent prior to running these cookies on your website.
SAVE & ACCEPT