Today we started recording the rhythm guitar tracks for the new Gene Dante record.  After attending all the drum sessions and the bass guitar sessions Erik Andersen finally got his chance to add to the mix.  The Starlets had a morning rehearsal so they got to Beach House Studios around one to one thirty pm.  We spent the next two hours setting up, and getting sounds.

I had decided to try out a new multi-mic set up, and had done some reading the night before about the effect of amp placement in the room.  We started out with the amp in a similar position in the room as when we were tracking bass, (a few feet from the wall at one end of the room and centered between the side walls). I had Erik start playing and walked around the room listening for “sweet” spots in the tone and took note of them.  I then thought we would try placing the amp in one corner of the room allowing the walls to form a “V” expanding out in front of the amp.  I wondered if the amp placement in the room would really make any difference, and to my surprise, it was instantly noticeably clearer and brighter at almost all points in the room.   Now we had our amp placement and it was on to mics. 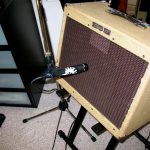 I went to the standard sm57 on axis just off center (about 11 o’clock) of the single 12 inch cone in the classic 30 amp two fingers from the grill.   Then I added a large diaphragm condenser.  I was tempted to use my U87, but I save that for vocals, so in place of that I used the Octava MKL 2500 tube mic.  I had tested this mic against the U87 on vocals in the past and found that the frequency response was practically identical, with the only difference being that the Octava doesn’t have as large a pick up pattern, so you get a bit less ambient noise/sound.  I placed the Octava beside the sm57, again two fingers from the grille.  Now I placed a Behringer ECM 8000 on either side of the room about two feet from the wall and 20-25 feet away from the amp.  We did some test tracking, and found that the Octava was out of phase with the sm57 and was cutting out the low end response of it.  I then tried a few different close placements of the Octava varying the on and off axis, but nothing really sounded good.  Then I pulled it six and a half feet away, directly out in front of the amp, and there was our golden tone.  Now we were ready to go. 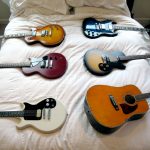 Erik chose ‘Beautiful Drag’ to attack first and we tracked the clean sound sans delay so that I could add delay in the final mix.  With the distortion sound for the chorus we tracked two different performances of the same part so they can be panned across the stereo field and give us a thick naturally chorused sound.  We also spent a bit of time choosing which guitars to use for each take.  Eric started with a Les Paul custom, and then switched to an SG for the chorus. 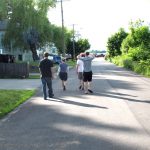 Now was the time to take a nice lunch out on the back deck in the afternoon sun.  We filled up on Thai food and then took a relaxing walk down to the beach, looked at clouds and boats,  digested and relaxed a bit.  Everyone now refueled and refreshed, we were ready to head back to the studio.

With ‘Beautiful Drag’ in the can we moved on to ‘We Are All Whores” which is pretty much all big muff distortion the whole way through.  This song is super fun to track and is definitely Gene’s follow up rocker to ‘C-Star’.  Erick nailed his first primary take and then we switched guitars and did our secondary take for wide panning.  We added a few takes of playing with feedback and some pick slides, and song number two was done.  Surprisingly nine hours had passed and it everyone had put in a long day.

Next weekend we’ll start in on the remaining songs and see how many we can get in the can.